Review: Show Me the Gold 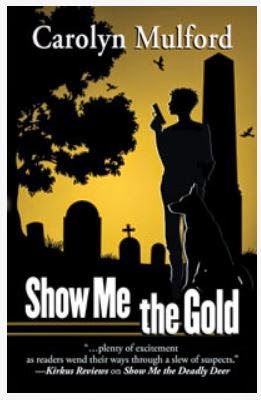 Carolyn Mulford’s “Show Me” mysteries — set in Missouri, the “show me” state — follow wounded ex-CIA agent Phoenix Smith to her small hometown of Laycock, where she hopes to build a new, safer life but can’t seem to stay out of the line of fire. The bad guys may not be the Eastern European big leaguers she dealt with as a spy, but their bullets are equally lethal.

In the third series entry (following Show Me the Murder and Show Me the Deadly Deer) Phoenix rides along when her old friend, Acting Sheriff Annalynn Keyser, responds to an urgent request for help in a neighboring county, where four bank robbers have been spotted at an abandoned farmhouse. The women get involved in a deadly shootout with two of the men, but the other two escape, apparently with the stolen gold. Phoenix’s endearing dog, a K9 Corps dropout named Achilles, is hopeless at tracking the escapees, but he saves his owner and the law enforcement officers at the scene when he sniffs explosives and warns them away from the booby-trapped house.

The FBI takes over the investigation, and agents sense that Phoenix isn’t what or who she seems. She can’t reveal her former double life as a covert operative. On the record, she’s merely a consultant for her former employer, a venture capital firm, and her primary personal interest is establishing a foundation to help the families of crime victims. The FBI tags her as a thief who made off with the missing gold. Phoenix’s efforts to prove her innocence and find the missing thieves who have the gold lead her into further danger.

The plot has enough twists, turns, and blind alleys to keep readers turning pages, but the greatest strength of Carolyn Mulford’s writing is her gift for creating likable characters with the kinds of flaws that make us all human. Annalynn is still grieving for her husband, the former sheriff, whose death in scandalous circumstances provided the plot for Show Me the Murder, and doubts that she has what it takes to head up local law enforcement. Phoenix herself misses her CIA adventures and wonders if she can ever resign herself to smalltown life again: “I’d recovered—almost—from my wound and accepted—almost—the loss of my old double life. I hadn’t regained the self-confidence and daring that had enabled me to succeed as a covert operative and as an executive of a venture capital firm. For the first time in my life, I didn’t have [a goal].” Watching this conflicted woman come to terms with her changed circumstances and find a new purpose is a reason in itself to read Mulford’s books.

The small town setting of Show Me the Gold has plenty of the crime and secrets that go into engaging mysteries. Highly recommended for readers who love character-driven stories with realistic small town settings.


The author provided an advance copy of Show Me the Gold in exchange for an honest review.

Posted by Sandra Parshall at 2:05 PM